It was spotted already in Jan 14th , 2017, by the Russians. RT published an article that was leaving no doubt: “Facebook’s job ads suggest ‘mind reading’ social networks could soon be a reality. Three months later during the 7th F8 conference, Facebook annual event for engineers, it was announced on stage to the public world. [1] [2] 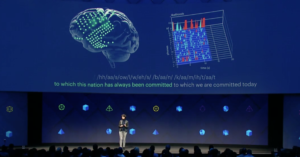 Facebook is working on a “typing by brain” project.

Regina Dugan, the head of Facebook’s R&D division Building 8, explained to conference attendees that the goal is to eventually allow people to type at 100 words per minute, 5X faster than typing on a phone, with just your mind. Another Facebook spokesperson said: “Our understanding of the way that words and their phonological and semantic attributes are encoded in brain activity is actually pretty good currently, but much of this understanding has been enabled by fMRI, which is noninvasive but very slow and not at all portable,” he said. “So I think that the bottleneck will be the imaging technology.” [3]

Dugan said that the gear will use optical imaging, and Facebook press release stressed that optical imaging “is the only non-invasive technique capable of providing both the spatial and temporal resolution we need.” 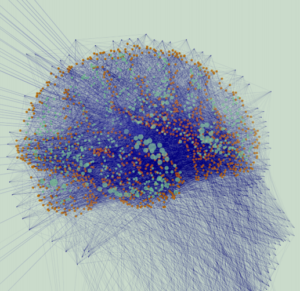 Facebook is working with scientists, engineers and system integrators like Edward Chang at UC San Francisco, Nathan Crone and and Mike Wolmetz at Johns Hopkins University, and Jack Gallant at UC Berkeley. These researchers study the neural circuitry of speech. They know where the semantic concepts are organized and accessed in the brain. Using machine learning methods they had already achieved decoding speech, language, and vision (among other things) during the last decade. [4] [5] [6] [7]

For the brain-speech-to-computer project, Facebook is partnering with a team of more than 60 engineers and 17 universities. [8]

Facebook research on a thought-to-text brain-computer-interface (BCI) is not the beginning of a new story, but a new chapter in the history of thought identification. [9]

The first results in this direction were reached by Marcel Just and  Tom Mitchell of Carnegie Mellon university, and by John-Dylan Haynes of the Max Planck Institute, in 2008. [9] 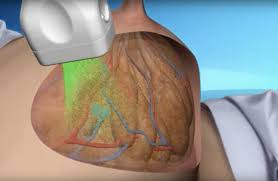 The process of “decoding thoughts” involves brain sensors, computer and algorithms. A sensors could use EGG, fMRI, or next Facebook’s opto-imaging scanner to extract real-time data of the brain activity. This big amount of data, is sent to an expert system: computational power and auto-learning algorithms. An expert system can “decode” meaningful information from brain activity data, like intentions, emotions, and thoughts as text, as Facebook’s next gadget will.  [9]

Already in 2010 the DARPA’s budget for the fiscal year included $4 million to start up a program called Silent Talk. The goal was to “allow user-to-user communication on the battlefield without the use of vocalized speech through analysis of neural signals”. [10] 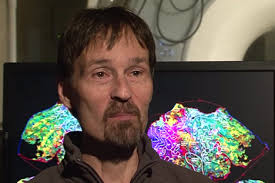 n 2011 and 2012, a group of researchers led by Jack L. Gallant, the one that started working with Facebook since 2017, succeeded in decoding our senses: humans audio and visual perceptions were reconstructed using functional Magnetic Resonance Imaging (fMRI) and computational models. [11] 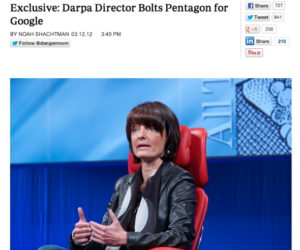 Regina Dugan, kickstarter and first director of Building 8, first served as a DARPA program manager from 1996 to 2000. From July 2009 to March 2012, Dugan served as the 19th Director of DARPA; she was the first woman to lead the Agency. As director of DARPA, Regina Douglas founded two new strategic offices: the Adaptive Execution Office (AEO), concerning technological knowledge transfer and technology assessment,, and Information Innovation Office (I2O) among whose areas there is the human-machine symbiosis. [13]

After Regina Dugan left DARPA in 2012 for projectX (Google’s twin of Building 8 project),  another woman became director of DARPA: Arati Prabhaka. She will be director of DARPA until 2018. In 2014 the Biological Technologies Office (BTO) was created by Arati, combining some programs from the Defense Sciences Office (DSO) and the Microsystems Technology Office (MTO). The office focuses on basic and applied research in the areas of gene editing, bio-technologies, nano-technologies, neurosciences and synthetic biology — from powered exoskeletons for soldiers to brain implants. [14] 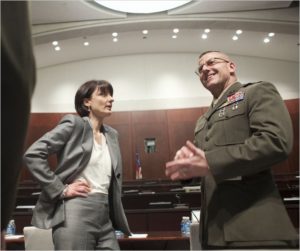 Founded in 2016, the startup Synchron is developing an implantable device that can capture signals from the brain and it is funded by DARPA. The device called “stentrode” is a composite nickel titanium stent wrapped in electrodes and then injected into the brain through your neck. The stentrode can read the brain signals, something that they have already been able to do successfully with the sheep. [15]

DARPA is the U.S. Defense Department’s infamous tech arm. Inventors of the GPS, the Internet, the intelligent-bombs, the psychological warfare (first known as AGILE), the Next Generation Social Science (NGS2, or in other words, how the study of social behavior is improved thanks to social media). [13] 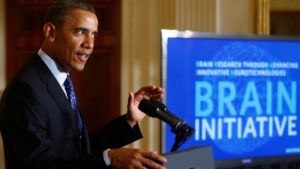 On April 2, 2013, the US president Barack Obama unveiled the “BRAIN” Initiative (Brain Research through Advancing Innovative Neurotechnologies): a collaborative, public-private research, with the goal of supporting the development and application of innovative technologies that can create a dynamic understanding of brain function. The BRAIN Initiative has been developed by the White House Office of Science and Technology Policy (OSTP), with proposed initial expenditures for fiscal year 2014 of approximately $100 million: $50 million from the Defense Advanced Research Projects Agency (DARPA), $40 milion from the National Institutes of Health (NIH), and $20 million from the National Science Foundation (NSF). Private sector partners also have made important commitments to support the BRAIN Initiative. In few years thousands of billion of dollars have been invested in neuroscience research and applications, funded by the BRAIN initiative. It has been compared to the Manhattan project. [16] [17] 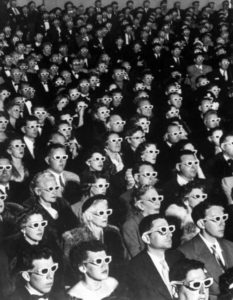 While director at DARPA, Regina Dugan founded DARPA’s AEO (Adaptive Execution Office), that focus on technological assessment, that means a scientific approach and an interactive and communicative process that aims to contribute to the formation of public and political opinion on societal aspects of science and technology. [18]

Zuckerberg wrote in a Facebook post: “I’m excited to have Regina apply DARPA-style breakthrough development at the intersection of science and products to our mission,” after hiring Regina as director of the Building 8. [19]

In short, Facebook’s attempt for mind-reading comes after years of U.S. DoD’s driven strategic researches; and Building 8 is probably DARPA’s imprinting to the next “social” generation.

A telepathic one; and it’s an unwary very scary controlled one! 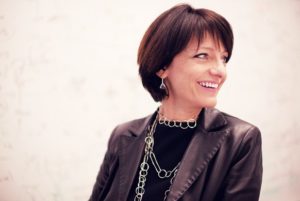 In October the 17th, 2017, Regina Dugan’s has left the project Building 8, after just 18 months. Dugan’s departure was announced internally on Tuesday, and in a post she wrote that she’s leaving to “lead a new endeavor,” though she didn’t specify what. Dugan will stay at Facebook into early 2018, to ensure “a smooth transition,” she added. [20]