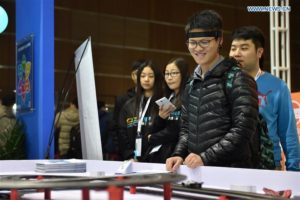 The best app.? A Mind-controlled app.! No more touching on an phone’ screen. Mind controllers will spread soon. China will be the producer that lower the market prices: the boom is just at its beginning.

Due to  to their relatively cheap production cost and their “wow” effect on consumers, mind-control headset is already one of the “made in China/Taiwan” gadgets that can be found on internet for a ridiculous price, as it starts hitting mass consumption.