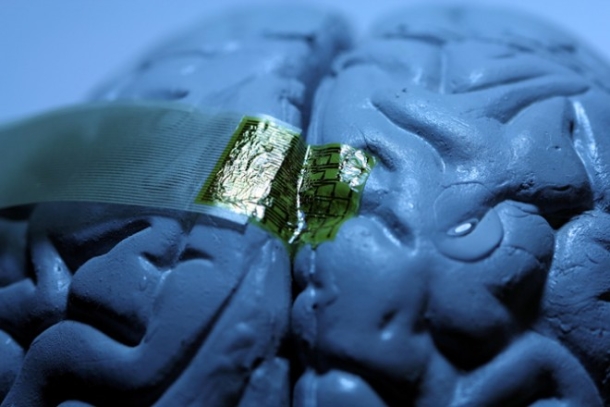 Matt Nagle was stabbed, leaving him paralysed in all four limbs. But since then, he has been able to use a modified computer to open e-mails, adjust the volume on his television, move a robotic arm and even play the computer game Pong. These powers came courtesy of a tiny square of electronic gadgetry implanted directly in his brain. 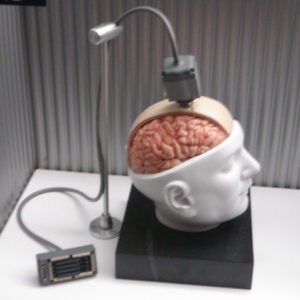 Dummy unit illustrating the design of a BrainGate interface.

The device implanted into Nagle’s brain, called the BrainGate, is an encouraging step on that journey. Created by neuroscientist John Donoghue of Brown University in Providence, Rhode Island, and developed by a Massachusetts-based start-up company called Cyberkinetics, it was hailed as a breakthrough in 2004 when Nagle (at the age of 25) first successfully used it.

A bundle of wires as thick as a coaxial cable runs from a connector in Nagle’s scalp to a refrigerator-sized cart of electronic gear. Inside his brain, a tiny array of microelectrodes picks up the cacophony of his neural activity; processors recognize the patterns associated with arm motions and translate them into signals that are interpreted by a computer. 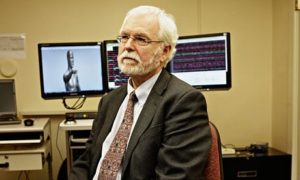 John Donoghue, head of neuroscience at Brown University and the founder of Cyberkinetics, eventually wants to hook BrainGate up to stimulators that can activate muscle tissue, bypassing a damaged nervous system entirely. In theory, once you can control a computer cursor, you can do anything from drawing circles to piloting a battleship. With enough computational power, “everything else is just engineering,” says Gerhard Friehs, the neurosurgeon from Brown who implanted Nagle’s device. 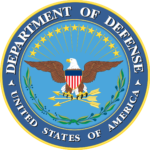 For now, that engineering remains a challenge. Cyberkinetics is just one of a dozen labs working on brain-computer interfaces, many of them funded by more than $25 million in grants from the US Department of Defense, which frankly envisions a future of soldier-controlled killer robots. Before that can happen, BCIs must become safe enough to be implanted in a human, durable enough to function reliably for years, and sensitive enough to pick up distinctive neural patterns. 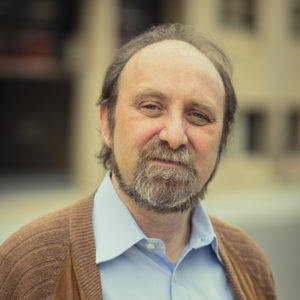 Miguel Nicolelis, a Brazilian-born neuroscientist at Duke who is developing a brain-operated exoskeleton that would enable a paralyzed person to walk. Electrodes implanted in the patient’s brain will record electrical signals that can be used to control the exoskeleton.

Other researchers were chasing the same goal. In 2002, Miguel Nicolelis, a neurobiologist at Duke, provided the best evidence yet of the brain’s plasticity. He and his team plugged 86 microwires into the brain of a monkey and taught the animal to use a joystick to move an onscreen cursor (the reward: a sip of juice). After the computer had learned to interpret the animal’s brain activity, Nicolelis disconnected the joystick. For a while, the monkey kept working it. But he eventually figured it out. The monkey dropped the joystick and stopped moving his arm; the cursor still moved to the target. As the monkey calmly downed another swallow of juice, Nicolelis’ lab fell silent in awe. The mammalian brain could assimilate a device – a machine.

One alternative is to record brain activity from the outside, without surgery, using an electroencephalogram, or EEG (see ‘Computer users move themselves with the mind‘). Such external EEG devices are easy to build and test, and so have traditionally been used instead of implants. “The functionality that can be restored with an implanted device is at the moment not much superior to what can be done using much cheaper devices that do not require surgery of any kind,” comments Francisco Sepulveda, who studies brain-computer interfaces at the University of Essex, UK. 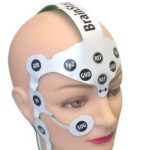 But EEG systems are still frustratingly difficult to use, as external electrodes must make sense of a mishmash of electrical noise coming from the brain’s millions of cells.

The challenge, therefore, is to develop a self-contained, implantable system that is sensitive and speedy enough to allow efficient communication that lasts a lifetime, says Krishna Shenoy of Stanford University in California, who has been working on ways to improve the BrainGate’s performance2. “We want to achieve performance that will make it worth the surgical risk,” he says.

By 2003, Donoghue and Normann had tested the device, now called BrainGate, in 22 monkeys. That got them the FDA approval they’d been looking for: a small trial with five human subjects. Their first was Matthew Nagle. 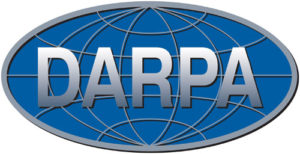 If Nagle’s brain rejects the implant, other researchers might shy away from implants altogether. “The key is what functions you want to restore,” says Duke’s Nicolelis. “If you only want to play a videogame or turn on your TV, you don’t need to get into the brain. It’s really a question of cost-benefit and risk.

That’s why I’m concerned about things moving too fast, Nicolelis said; we need to know more about the risks of leaving these things in people’s heads for long periods. We don’t know much yet.”

That’s why some BCI researchers are looking for less invasive methods. A team of Austrian researchers taught a quadriplegic patient to open and close a prosthetic hand using an electrode-studded skullcap that picked up electroencephalograms, waves of electricity generated by the entire brain.

It was impressive, but the patient required five months of training to pull it off. And this past December, researchers at the Wadsworth Center in Albany, New York, reported that a patient was able to move a cursor around on a monitor using externally detected signals – no implant. Another group has tried an electrode array that rests on the surface of the brain without penetrating the cortex. “I don’t think anybody really knows which method is going to be the safest and still give detailed pictures of brain activity,” says Wadsworth’s Gerwin Schalk. 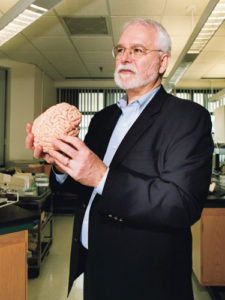 Donoghue remains convinced that the only way to give people with immobile bodies full interaction with their environment is through embedded electrodes. “No other method gives you the power and clarity you need to transform this noisy signal into something that a patient can use,” he says. “The people who question whether this will really work, I don’t think they realize how much has already been done. We’ve got a 1,098-day monkey, who had a working BCI for almost three years. The question is, how long do you want to keep doing this in monkeys?” 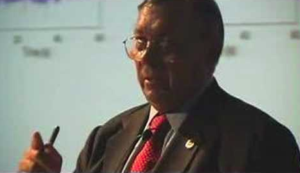 Anthony Tether, the director of DARPA in 2002

At a conference in 2002, Anthony Tether, the director of DARPA, envisioned the military outcome of BCI research. “Imagine 25 years from now where old guys like me put on a pair of glasses or a helmet and open our eyes,” Tether said. “Somewhere there will be a robot that will open its eyes, and we will be able to see what the robot sees. We will be able to remotely look down on a cave and think to ourselves, ‘Let’s go down there and kick some butt.’ And the robots will respond, controlled by our thoughts. Imagine a warrior with the intellect of a human and the immortality of a machine.” 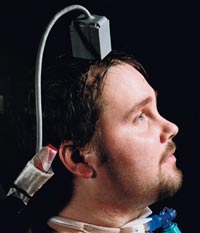 Nagle has died on July 24, 2007 in Stoughton, Massachusetts from sepsis.